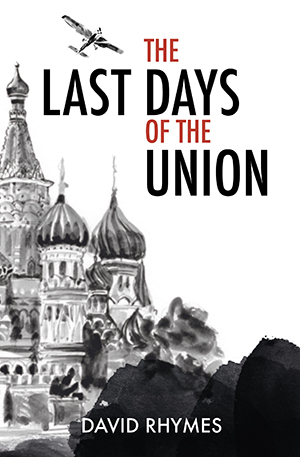 Very few writers would dare to attempt what David Rhymes does here, let alone deliver something so authentic, convincing and real. The Last Days of the Union is a deep-dive into the Soviet Union of the late 1980s, and in particular a fascinating re-imagining of one strange, now-neglected event and all the circumstances that surrounded it. As a work of historical fiction, it depicts with breathtaking nuance and skill a time of instability, risk and political change. The multiple perspectives of the ensemble cast interlock like a sophisticated jigsaw puzzle. And at the centre lies the enigma of the young pilot Mathias Rust, whose rogue actions and motives were probably a mystery even to himself.

~ Michael Loveday, author of Three Men on the Edge

The Last Days of the Union is a cinematic cold war adventure, wrapped in a political thriller with the investigative flair of new journalism, and the vivid economy of flash. David Rhymes skilfully juxtaposes international politics with the minutiae of everyday life, with protocol, toothbrushes, snowdrops, and pickles to tell the story of a reckless dreamer, who briefly and bizarrely landed on the world’s stage.

~ Jupiter Jones, author of The Death and Life of Mrs Parker

Like the real-life plane flight that sparked off this novella, The Last Days of the Union cleverly circles around the momentous event of a teenage pilot landing in Moscow Red Square in 1980s. In wonderfully vivid and concise prose David Rhymes fictionalises the impact of the journey on the lives of many individuals involved. A brilliant read.
~ Jude Higgins, author of The Chemist’s House